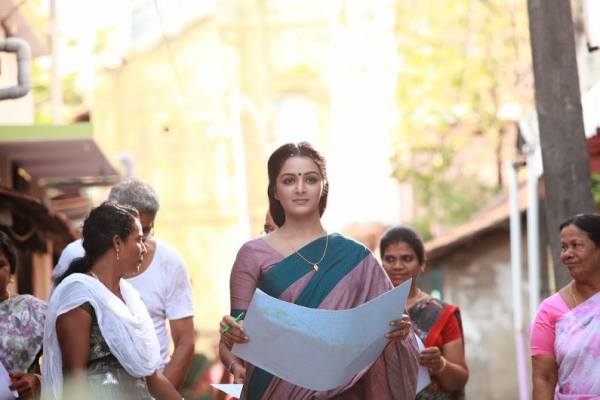 Nirupama (Manju Warrier) with her plans for organic horticulture on rooftop terraces.

Here is a Malayalam film released in UK cinemas without English subtitles. I was surprised and slightly worried at the prospect of 141 minutes of incomprehension. But I shouldn’t have worried. This is a popular drama (but not a Bollywood-style film) and although I missed a couple of key plot points at the time, I’ve since read the Indian reviews and answered most of my own questions.

How Old Are You? asks that simple question of its female lead and then proceeds to show her first being humiliated and then recovering and ending triumphant. It has been promoted as a film of ‘female empowerment’. It is also the ‘comeback film’ of Malayali star Manju Warrier after 14 years away from the industry she conquered in the 1990s. (It somehow seems to be appropriate that what kept her away was marriage and home-making but now she is divorcing and returning to the big screen.) 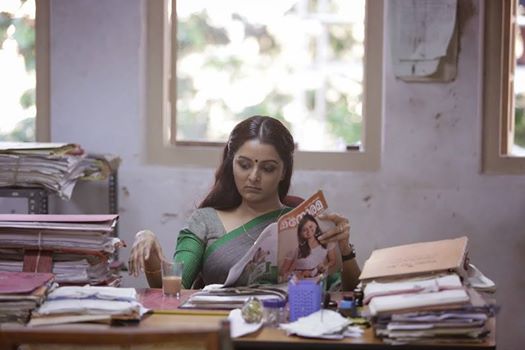 Nirupama is a civil servant in a typical revenue office in Kochi-Ernakulam, the largest urban area in Kerala. She has become bored by her work, the stresses of looking after her household and dealing with her school-age daughter and husband who works as a radio announcer. She is sometimes rude or offhand and she becomes egotistical when her daughter somehow ‘wins’ her the chance to meet the President of India as an ‘ordinary Indian woman’. But she embarrasses herself at the meeting and is humiliated when the incident is picked up on social media, going viral very quickly. Out of this disaster comes the chance for redemption when she is recognised by Susan (Kerala has a large Christian community), an old classmate from university who has become an important person (in business or government – I couldn’t work this out). Nirupama was an inspirational student back in 1996, leading a strike and achieving much for her classmates and Susan reminds her of what she did. Gradually she gets her confidence back and achieves something again – leading to an inevitable ending that most audiences will spot coming. The age question comes when Nirupama learns that her husband and daughter plan to migrate to Ireland, but she can only join them if she can get a job and the Irish recruiters have an age cut-off at 35 (surely illegal in the EU?). She is 36. This scene actually starts the film but I think this must be a flashforward – it’s quite difficult to pin down the chronology of events without dialogue to anchor meanings. The move to Ireland for the father and daughter is both a contributing factor to the change in Nirupama’s outlook on life and a possible obstacle when she becomes successful. 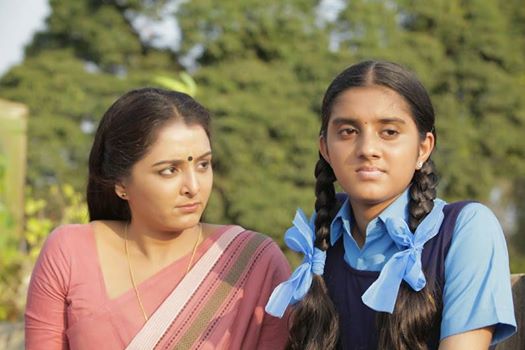 How Old Are You? has been very successful in Kerala, being seen as both a comeback for a popular and respected female star and a film about female empowerment. It has been well-received by the English language press in India but I’m not sure how widely it has been seen across the country. (If it hasn’t been dubbed/subbed in English or Hindi, I wonder how accessible it is?). In the UK the film is imported by Indian Movies UK, a Malayali distributor in India bringing films to the diaspora in the UK and Europe. I didn’t realise that there were so many Keralites in the UK. There are stories of full houses in some screenings (there were only five of us in Bradford). Malayalis have also formed important diaspora communities in the Gulf and this Facebook page details screenings of the film in Singapore as well as Dubai, US and Australia. The irony of this success is that from an outsider’s perspective Kerala is in many ways the least likely Indian state to suffer from male chauvinism or repression of women. Kerala has the highest levels of education in India and the highest rating on the ‘Human Development Index’ (HDI). The theme of the second part of the film, when Nirupama accidentally discovers the merits of organic horticulture, is however an important local issue because despite success in new technologies, Kerala is still dependent on agriculture and production of primary goods as well as tourism (with some of India’s areas of outstanding beauty).

Directed by Rosshan Andrrews and written by Bobby and Sanjay, a trio associated with three previously successful films, How Old Are You? is a good example of contemporary Malayalam filmmaking. The film looks good as lensed by R. Diwakaran but the music by Gopi Sunder was too dominant for my taste. One of the advantages of not knowing the language is that it focuses attention on the actors in terms of body language, facial gestures etc. I thought the cast was very good all round and it’s clear that Manju Warrier is the star. One of the strengths of South Indian cinema generally is that the leading actors look like ‘real people’. Malayalam cinema has historically been known for art films as well as popular genre films and I wasn’t surprised to find a conventional genre film with a serious message. How Old Are You? is a drama with only two songs, one played during the closing credits and the other as accompaniment to a montage. I can say that I was never bored over 140 minutes in which I understood only the occasional lines of English (mostly a few words inserted into the Malayalam dialogue). That must say something, although I must confess that the few weeks I spent in Kerala convinced me that it is one of my favourite regions – so I’m biased!

I’d like to watch more Malayalam films and kudos to Cineworld for showing this in Bradford. But it would be nice to know in advance if there are no English subs. Since all the Hindi and Tamil films I’ve seen in the same cinema have had subs, I think it was reasonable to expect them for this screening. The next release from Indian Movies UK, Bangalore Days, is in cinemas this week.