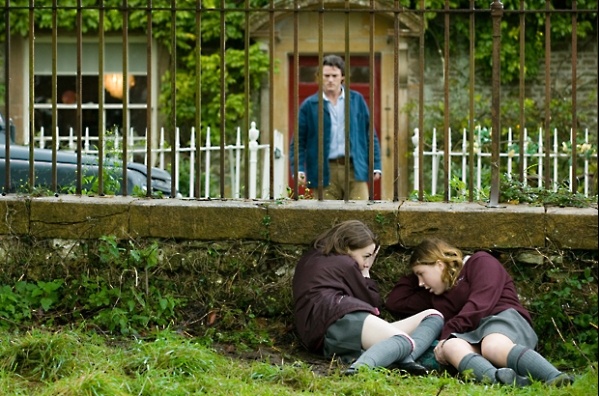 The two teenage girls, the ‘chorus’, wait outside Tamara Drewe’s house to see what’s going on.

I’m not sure what I can say about Tamara Drewe except that I enjoyed every moment. But that’s hardly surprising since I’m a fan of director Stephen Frears and the source material, Posy Simmonds’ comic strip/graphic novel from 2005-7, is one of my fondest memories. The strip ran in the Guardian‘s Saturday Review section in 110 instalments (click on the image below – the whole thing is available online) and I didn’t miss a week. The problem is, of course, that the film is being heavily promoted and released through mainstream multiplexes to audiences who have no knowledge of the strip. The result is a very mixed reception. Audiences under 40 have seemingly ignored the film and IMDB carries several outraged reviews. Interestingly, the film has done pretty well in France and I suspect that it might do well in some other territories where audiences might take it at face value as a bucolic comedy (though the ending – even though softened from the original – might be a shock). 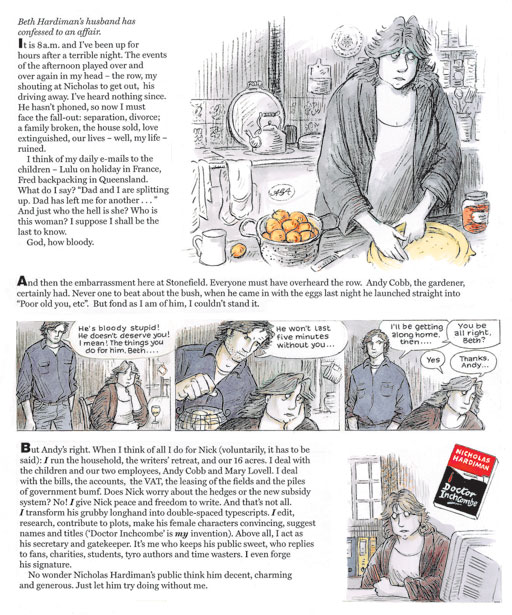 Episode 5 of Tamara Drewe as it appeared in the Guardian

Perhaps the most useful thing I can do is to set it in context and try to explain to readers outside the UK its peculiar allure. Posy Simmonds has had a long career, much of it in the Guardian where she has maintained a gentle satire on the English middle-classes, holding a mirror up to the Guardian readership’s sense of itself as well as taking down the more conservative readers of the UK’s other broadsheets (and tabloids like the Daily Mail). During the 1980s Simmonds’ vehicle for this was a strip about a London family with generally leftist/vaguely hippy politics known as the Webbers (possibly a joke about the sociologist Max Weber). Throughout the period of Thatcher’s Britain the travails of the Webber clan offered a complement to the more vicious satire of the UK’s greatest political cartoonist, Steve Bell. Between them, Posy and Steve kept many of us sane throughout those dark years. In 1999 Posy Simmonds produced Gemma Bovery which also ran in the Guardian. That novel, set in Normandy states its source inspiration in its title. Tamara Drewe as a title is less revealing but the film adaptation lays on enough clues to reveal that we are in the world of Thomas Hardy and his novel Far From the Madding Crowd – adapted as a John Schlesinger film in 1967 with Julie Christie as Bathsheba Everdene, the Tamara Drewe character. If you don’t know the story, it concerns a young and very attractive woman who comes into property in a Wessex (Dorset) village and finds herself pursued by three men – a solid local farmer, a flash young blade (in the novel, a hussar, in the film a rock drummer) and an older married man. Valentine letters (emails) to the men create rather unfortunate circumstances. Simmonds’ innovation is to provide a ‘writers’ retreat’ in the village so that Hardy fan-writers, amongst others, can join the fun.

The screenwriter Moira Buffini has captured much of what was in Simmonds’ satire, but either she or the producers have chickened out with the ending and overall I would have liked the darker and more ‘Hardyesque’ ending of the original. Some of the other, nuanced changes work much better. The ‘Greek chorus’ of the two teenagers who watch all the goings-on and interfere in the narrative are slightly younger than I had imagined from the strip, but work very well and are the best bit of the satire. I don’t remember the American academic from the strip, so perhaps he is an invention. If so, it’s a great idea. He is the balance for the two girls in the ‘chorus’ offering postmodernist comments about Hardy which I enjoyed. The trump trick for all those of us who are fans of the UK radio sitcom The Archers (now in its 60th year and possibly the longest-running sitcom of all) is the casting of Tamsin Greig in the movie as the long-suffering wife of the philandering novelist. She’s there because she is one of UK stage and TV screen’s greatest comedians, but for Archers fans she is always Debbie Aldridge and part of the upper middle-class of the farming community where she is a counterbalance to her evil father, Brian Aldridge, once über-villain and now mellowing paterfamilias. In fact it’s a joy to see so much great acting talent in Tamara Drewe, including the wonderful Susan Wooldridge (Daphne Manners in The Jewel in the Crown) for once allowed into a feature film as a gun-toting cattle farmer.

Poor Stephen Frears, like Michael Winterbottom, seems to suffer from being too eclectic in his tastes and too willing to lose himself in his projects. For me, he has made some of the best British films of the last 40 years and although he doesn’t give a good interview and promote himself as an auteur, he deserves recognition. Tamara Drewe isn’t the UK film of the year, but it’s certainly worth watching and thinking about.

Here’s the US trailer: