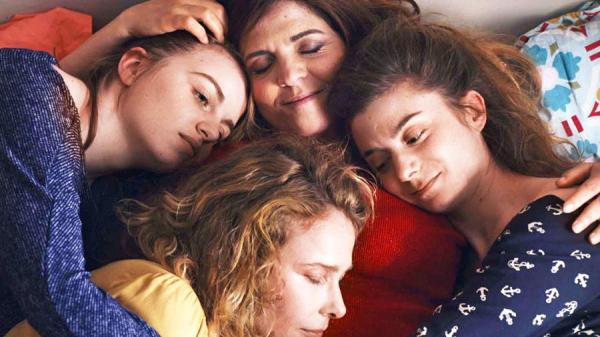 I missed this on release in the UK in 2018 but caught it now on BBC iPlayer where it is available for the next three weeks. I’m a fan of writer-director Agnès Jaoui but here she is solely in her other incarnation as an actor playing the titular character Aurore. There also appears to be a second French title, Fifty Springtimes. (The English title, ‘I Got Life!’ is taken from the Nina Simone song which is clearly important for Aurore.)

Aurore is fifty, struggling to get through the menopause and the hot flushes she experiences at all the most difficult times. One by one the cruelties of life for a single woman, not yet divorced at 50 descend upon her. Her male doctor suggests that she accept what happens in a philosophical way. The new owner of the restaurant where she has worked for years starts by giving her a new ‘sexier’ name and proceeds to piss her off by re-organising things that don’t need to be changed. Her eldest daughter announces her pregnancy and her younger daughter is primed to leave home with her boyfriend from Barcelona. Her only ray of hope is her best friend Mano (Pascale Arbillot).

It’s always possible to sing and dance your blues away . . .

Aurore is the second feature directed by Blandine Lenoir and below I’ve added the short interview she did for UK distributors Peccadillo Pictures. In it she says her aims are to portray ideas about society through her central character, the fifty year-old woman who is everywhere but not often the central character in films. Lenoir says she is happiest dealing with taboos, things that frighten us that we should laugh at. Her film received generally good reviews as well as a few snotty ones. It has also been branded ‘the most F-rated film’ with the suggestion that the main audience will be and should be women. I think any man over fifty ought to be able to enjoy the film as well. I can’t speak for younger men but I thought the film was funny and made some excellent points. The snotty reviews think the film over-sentimentalises everything and that the feelgood ending is contrived. It’s a romantic comedy for heaven’s sake! The perceptive social comments come primarily in relation to Aurore’s search for a new job. We get the mindless training workshop for those seeking employment and a couple of hilarious interviews with employment agencies but the killer is the lecture Aurore receives from a Black woman cleaner who offers an analysis of how discrimination and prejudice works in French employment. Add to this Aurore’s contact with older women and Lenoir smuggles in some sharp social analysis. Most of the men in the film are inadequate in some way, but two of them turn up trumps and, along with her female friends, help Aurore save herself.

Aurore is a well-made and beautifully-acted comedy set in La Rochelle. Agnès Jouai is one of the stars of French cinema in each of her three filmmaking roles and I’m always amazed that she doesn’t get the credit she deserves in the international media. Aurore certainly cheered up our Saturday night and it is well worth checking out. Jouai’s earlier films celebrated on this blog include Look at Me (France-Italy 2004), Let’s Talk About the Rain (France 2008) and Under the Rainbow (France 2013). I’d also recommend the earlier Le goût des autres (France 2000). Sadly, her writing and actor partner Jean-Pierre Bacri died in January this year. He was an important element of the earlier films.