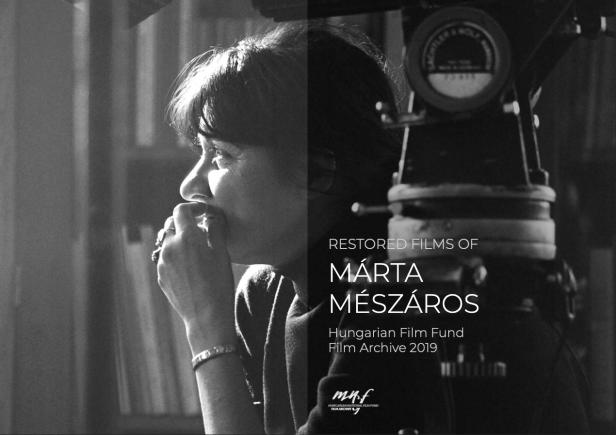 This début fiction feature by the documentarist Márta Mészáros is a stunning portrait of a young woman in Hungary searching with steely determination for a sense of her own identity in a society experiencing a dramatic contrast between tradition and developing modernity. It is both an example of the New Wave films of Eastern Europe in the late 1960s and one of the early films of feminist cinema in Europe (although Mészáros is reported as not recognising the ‘feminist’ label). The film is currently streaming on MUBI as part of a four film offering of restored prints. The film also goes by two other English titles, The Day Has Gone and The Sun Has Gone.

The central character is Erzsi, a young woman of 24 who has grown up in a state orphanage and now works in a textile factory, living in what appears to be a dormitory in a workers’ hostel. The narrative opens with  a monthly meal at the orphanage where the former residents are served by the older girls who are still living in the orphanage. The opening credits have shown us a group of young women in their twenties being given training in archery. The orphanage and its ‘alumni’ association appear to be single sex institutions, possibly linked directly to the factory as state institutions. Eventually Erzsi is picked out by the camera when she leaves the Sunday meal, complaining that she doesn’t feel well. In fact she is probably just bored. Later she tells her friend that she has made contact with a woman who is probably her mother and she has decided to visit the village where this woman lives. Erzsi is played by Kati Kovács who in 1968 had already been recognised in a TV talent contest and had sung a winning song in a televised dance-song festival. After 1970 her recording career took off and she has become one of Hungary’s most famous singers. Her confidence as a performer is already evident in her portrayal of Erzsi.

Erzsi takes a train and a bus to get to the village where she finds the family house of her mother. But the welcome is not warm – the woman says that she will introduce Erzsi as a niece who is visiting because she has a work appointment close by. The evening and the next day are difficult for Erzsi. The woman is married and has a grown up son, and a younger boy with her husband. His mother is also living with her. Erzsi becomes the focus of attention for the husband and eldest son. She gets little opportunity to speak to any of the family, even if she wanted to. In a key scene, the family watch a TV broadcast from London of a ‘beauty contest’ (see the image below). Note how the woman watches her husband but the others watch the screen. The woman is dressed traditionally and so is her mother (still in the kitchen). Television was still relatively new in the 1960s, especially in rural Hungary, and these formal groups (as in the UK in the 1950s) were common for audiences. The following day the family attend a dance in the village and the traditional/modern split becomes more apparent especially between the younger and older women. The band is a ‘beat group’ which resembles those seen in small towns in the UK in the 1960s. Erzsi leaves soon after the dance without saying goodbye. On the train back to Budapest she decides to go home with a man she meets.

When she gets up the next morning in her dormitory she returns to the factory and socialises with her small circle of friends. She has ‘admirers’, including a young man who appears to be stalking her. Her attitudes towards men are straightforward. She enjoys some of the attention and dismisses other attempts to engage with her. She appears to enjoy her sexual encounters but has no romantic notions. I was reminded to some extent of the Hungarian girl who loves the ratcatcher in Dusan Makavejev’s Tragedy of a Switchboard Operator (Yugoslavia 1967). Erzsi is a ‘modern’ young woman but she is still interested in finding out about her history. The film is also similar in some ways to Pawel Pawlikowski’s later prize-winning Ida (Poland 2013) but in The Girl, Erzsi who would have been born in 1944, does not engage directly in discussions about the Second World War. She does eventually meet a man who claims to have known her parents and he tells her a story about them. They are both dead it seems. Erzsi doesn’t believe him but later says it was a ‘nice story’. Hungarians in the 1960s must have been conflicted about remembering the war period. They did not come out of it well, aligned to the Axis powers initially and then occupied by the Nazis. This history also affected the later relationship between the Soviet Union and Hungary.

The oddest thing about Erzsi is that on three occasions she pays the bills for people she meets or her friends. She is paid a modest wage as a textile worker but seems unconcerned about money. Overall, she is a ‘cool’ character who might appear in any 1960s film from Europe or North America. Much of the impetus behind this character must come from Márta Mészáros herself. The director wrote the script herself and her own biography records a similar history of ‘displacement’. Born in 1931, Mészáros went with her artist parents to Moscow as a young child and was orphaned a few years later, being brought up by a foster mother. She returned to Hungary as a teenager in 1946 and later went back to Moscow for film school. She then worked as a documentary filmmaker in both Hungary and Romania. Her second marriage was to the director Miklós Jancsó. They divorced in 1973. The Girl created a strong impression with critics and audiences but divisions quickly developed and it has been suggested that Mészáros became more popular outside Hungary. The reason for this was her strong central aim of exploring the ‘modernising’ of Hungarian society and specifically gender and sexual relations. I suspect that she also disturbed audiences with her probing into personal and social history in a society in which personal identity post-1945 was a difficult issue for many. Here’s a more theorised observation from one writer on Mészáros:

There are not many reviews of The Girl in English and some of them seem off the mark to me. Erzsi is often seen by reviewers as ‘lonely’ and ‘oppressed’. One American review I read seemed to suggest that this was because Hungary was a cold and unhappy country in the Soviet bloc. I don’t think Erzsi is alone and oppressed but clear-eyed and focused. The narrative is recognisable as an East European New Wave film but the standout performance of Kati Kovács is riveting. It is worth watching the film just to see this powerful performance. Her hair and dress sense is modern and sophisticated but it is her ‘gaze’ that is most striking. The presentation of pop music in Hungary in the film is remarkable for most Western viewers (although I am reminded of the earlier Czech New Wave film Audition (Czechoslovakia 1963, by Milos Forman) and the images below refer to a dance at the end of the film in which the band seem to be riffing, in both a musical and fashion sense, on Californian psychedelic and rock music of 1966/7.

The Girl is a relatively short film, more like 84 minutes in this restoration than the 90 suggested by IMDb. The restoration looks very good and the black and white photography by Tamás Somló presented in Academy (1.37:1) does justice to Márta Mészáros’ selection of locations and framings. Both director and cinematographer had come out of documentary work and with Kati Kovács’ performance as a focus the presentation of life in Budapest and the contrast with the outlying village is compelling. This is one of the best films I’ve seen for a long time. I note the next film in the quartet has just popped up on MUBI. There is too much to watch all of a sudden. In fact we have already reviewed one of the four restorations, Adoption ( Hungary 1975). Other films by Márta Mészáros on this blog are Diary for My Children (Hungary 1982/4),  The Unburied Man (Hungary-Poland-Slovakia 2004) and The Last Report on Anna (Hungary 2009). Her latest film is Aurora Borealis: Északi fény (2017). Her body of work is in many ways comparable with that of Agnès Varda and it deserves to be much more widely celebrated.