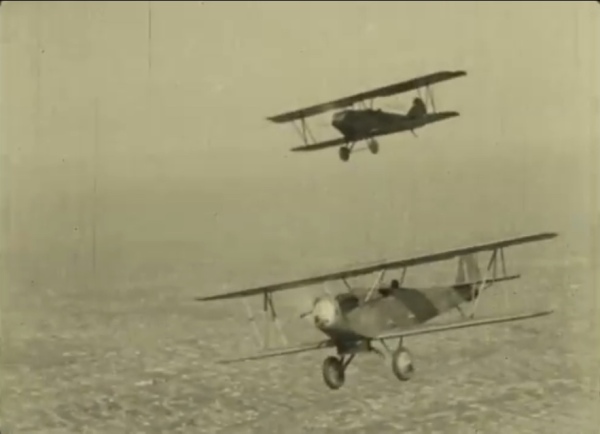 The online editions of the Kennington Bioscope continue into 2021, commencing with a programme courtesy of the archives of the Library of Congress. Episode 14 on January 27th, 2021 at 19.30 GMT, free and open access worldwide on YouTube.

Fly high with the main presentation of comedy-drama, Daring Deeds (US 1927), directed by Duke Worne, in which William Gordon, Jr. (Billy Sullivan) is the rebellious heir to a million-dollar airplane business. He leaves home in search of adventure and falls in love with Helen (Molly Malone), the daughter of an eccentric, destitute inventor. William enters an air race using a souped-up plane, which rewards with some thrilling aerial shots. The title is five reels in black and white running about 60 minutes. You can get more details on the director and the cast on the American Film Institute’s pages [AFI].

Supporting the feature are have two short films, the mesmerising H20 (US 1929), a watery documentary by cinematographer Ralph Steiner and The Day After (US 1909), an American Biograph comedy detailing the dangers of alcoholic refreshment imbibed by the hosts of a New Year’s party. Directed by D.W. Griffith and written by Mary Pickford, it features several familiar faces from the studio’s stable, among them Mack Sennett and Blanche Sweet. This short film is in black and white, is 460 feet in length and runs for about eight  minutes. The AFI catalogue page includes a synopsis.

As usual the programme includes introduction and a musical accompaniment.