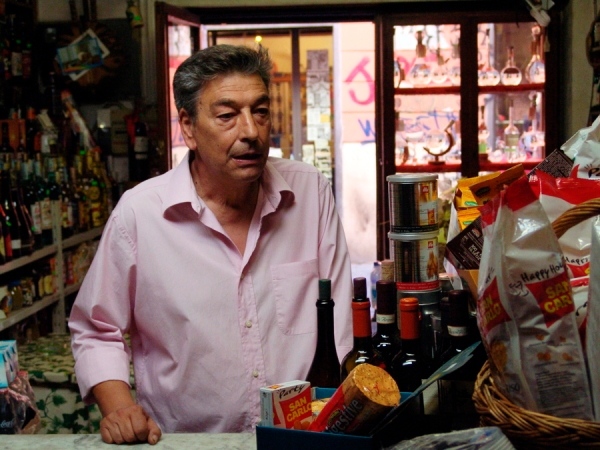 Gianni’s day begins at his local shop with a small glass of white wine . . .

I remembered this film, or possibly its successor The Salt of Life (2011), when I was given a DVD of it by a friend (who often finds interesting DVDs in London charity shops). This is a U Certificate film running just 75 minutes so its something anyone can watch. We sat down with it on a Saturday night when TV is virtually unwatchable (if you aren’t following the serial on BBC4). Watching it with the lockdown in Italy was an emotional experience. 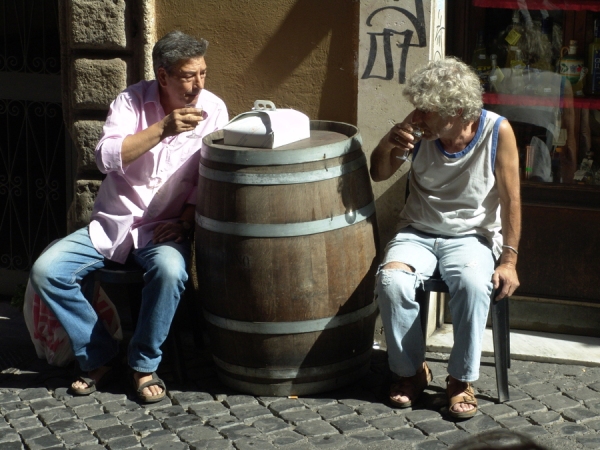 . . . and he often joins his friend ‘Viking’ outside the shop

Writer–director Gianni Di Gregorio had been an actor and writer with experience in theatre and film before he made this film as his directorial début. At roughly the same time he also worked on the rather different Gomorra for director Matteo Garrone (who, in turn produced this film). Di Gregorio also plays the central character in Mid-August Lunch and the main ‘action’ is set in his own flat. Playing what seems like a barely changed version of himself, Gianni is struggling to maintain his flat which houses him and his 93 year-old mother (Valeria De Franciscis). He owes back-rent and payments for various facilities but as the ancient festival of Ferragosto approaches, his landlord’s agent offers him a deal. If he will look after the agent’s mother Marina (Marina Cacciotti) over the the two nights of the festival, the agent will waive the amenities payments and the back-rent. Gianni feels he has to agree, but when the mother arrives she brings a second ‘guest’, Maria, the agent’s aunt. And then, to cap it all, Gianni’s doctor comes up with a similar proposal, depositing his mother Grazia (Grazia Cesarini Sforza) with strict instructions about medication and diet. Gianni finds himself catering for four elderly ladies and trying to keep them amused.

Gianni with his mother

There isn’t really any plot to speak of. The three ‘guests’ plus Gianni’s mother, are all presented as ‘ordinary people’ with the kinds of likes and dislikes we all have. They want to watch TV or they want quiet. They don’t want to abide by the ‘rules’ that Gianni has been given, especially about what they are ‘allowed’ to eat. But they are also gregarious and flirtatious. Fortunately, Gianni has two great qualities. He is able to remain calm under pressure and he appears to be both an imaginative and efficient cook. Both of these qualities are perhaps only maintained by copious imbibing of white wine. In my limited experience of Italian film, TV and literature, a small glass of white wine is an essential part of daily life, capable of keeping most horrors at bay.

Maria helps in the kitchen, slicing the mozzarella

One of the great pleasures of this film, apart from the interactions of the characters is its presentation of Italian food culture. It appears to me that Italians generally eat very well. They take care to eat interesting things and they are prepared to pay for good quality provisions in local shops. It’s a long time since I’ve been to Italy so perhaps it is now over-run by fast food joints and German supermarkets? I hope not. During this time of coronavirus it breaks my heart to think that this eating culture has been disrupted.