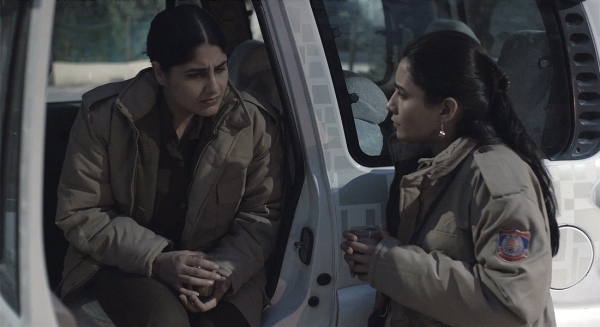 Cops on the street

This low-budget, low key film about female police officers in Delhi lingers in the mind. Written, directed and edited by Chandigarh-born, and American educated, Ivan Ayr the film has an observational documentary quality that downplays potential drama; in one scene, the protagonists listen to corrupt cops extracting bribes. It is shot from their distant perspective and this serves to drain the drama but at the same time maintains a realist viewpoint. By subverting genre expectation, we expect the good cops to sort out the bad ones, the film signifies its realism. This is further reinforced by the use of sequence shots throughout; all the scenes are shot in one take.

Soni (Geetika Vidya Ohlyan) is a cop with a temper; she’s used as bait on the streets of Delhi to trap men who sexually abuse women. Her superior, Kolpana (Saloni Batra), tries to rein her in whilst protecting her from her the police hierarchy. Key to the film is the developing relationship between the women which is more important than the cop narrative. Both the actors are newcomers (it’s Ohlyan’s first film and Batra’s first feature) and they stand up very well to the strains of the long takes. Vikas Shukla is superb as Soni’s ex-boyfriend who’s trying to wheedle his way back into her affections.

David Bolen’s cinematography is excellent capturing the urban night-time wasteland of the streets that serves as Soni’s workplace.

I was surprised the film was authored by a male as he seems to me to capture a female point-of-view with great authenticity. He researched the police procedure thoroughly but also portrays the position of women, even putatively powerful ones as police, in patriarchal India. Radio news reports punctuate the soundtrack about having the apartheid of women-only public transport to protect them against men. At the film’s conclusion it’s clear that the film argues that the nepotism of Indian society has to change in order for there to be a fundamental improvement in the lot of women.

Ayr takes on not just the would-be rapists and the boys who know their influential parents will protect them should they get into trouble. Kolpana’s family gently hint that she’s not getting any younger (she’s 30) and so should be having children. The insistence on motherhood must, for some, become a stultifying bind and Batra subtly portrays her character’s frustration whilst trying to avoid confrontation.

The film was celebrated at some film festivals last year but not distributed in cinemas in the UK. It’s ‘washed up’ on Netflix.