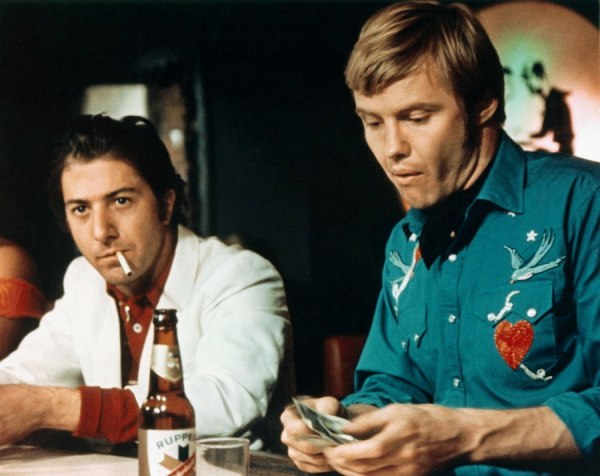 This completed my trio of films from the ‘End of Innocence’ strand of archive Hollywood films at the festival. Allan Hunter had his largest and most appreciative audience yet for his introduction. He made a strong argument that Midnight Cowboy marked a fundamental change in Hollywood, a ‘passing of the baton’ from one generation to another – at least in terms of stars. He reminded us that this was the first ‘X’ film to win Best Picture Oscar and he told us an anecdote about how Jon Voight, backstage at the Oscars to collect the Best Director Oscar on behalf of John Schlesinger, was congratulated by Fred Astaire. I’m amazed that  the film still had an ’18’ certificate in the UK when the bbfc certified the most recent video copy in 2007. I don’t really understand why it was an ‘X’ in the first place. Hunter argued that Schlesinger was only half ‘out’ as gay at the time (but his next film Sunday, Bloody Sunday in 1971 features the bisexual young man played by Murray Head who is the lover of both Glenda Jackson and Peter Finch). Midnight Cowboy has a distinct homo-erotic subtext, but the original novel was more clearly the work of a gay writer. I’ve read that the issue in the US was the oral sex scene in the film. I guess we are more used to such scenes now but it must have been ‘shocking’ at the time.

If you haven’t seen Midnight Cowboy, the narrative sees a a young man from Texas dreaming of a better life in New York. It certainly has been a difficult life so far for Joe Buck (Jon Voight), currently washing dishes in a greasy spoon café. Having saved for new cowboy boots he sets out on a long-distance bus believing New York and ‘rich ladies’ in particular, are waiting for a handsome cowboy stud like Joe. Inevitably he is the naïve rube in the city and is quickly reduced to hustling – which leads him to meet Ritso or ‘Ratso’ (Dustin Hoffman). The pair become an odd couple who attempt to survive a New York winter and then to head for Florida and warmth with tragic results. 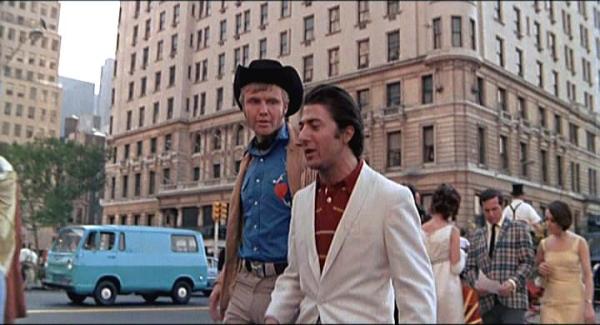 The two leads filmed on the streets of New York

Allan Hunter’s definition of ‘New Hollywood’ is based on slightly different ideas than mine I think. Whereas both Alice’s Restaurant and Medium Cool were, in their different ways, offering something new and in the rest of the strand Easy Rider certainly shook up the industry, I think most of the other selections were mainstream films made in the classical manner. True, Voight and Hoffman, when they made Midnight Cowboy, were not yet Hollywood stars and Hunter told us that Schlesinger was able to film them on the street without turning heads. And in the sense that this was a film without established stars it was certainly a surprise that it won so many awards. I’m not arguing that it didn’t deserve them. It still comes across as a very well-made and enjoyable film and I was surprised how much I remembered from it. It also has the benefit of the Nilsson song ‘Everybody’s Talkin’ as part of a memorable soundtrack and the little bits of ‘business’, concocted by Hoffman in particular, still work. On the other hand, Schlesinger was already the director of four major UK films, one of which, Darling, won 3 Oscars in 1965. He would go to make four more major pictures in the 1970s but all were mainstream features. The film was also a literary adaptation of James Leo Herlihy’s novel which first appeared in 1965. Herlihy had also written plays and an earlier novel All Fall Down (1960) that became a 1962 film for John Frankenheimer. Herlihy, like Schlesinger was a man of the 1950s and 1960s and not part of the New Hollywood as such. His Wikipedia entry states that he attended Black Mountain College, where Arthur Penn had once studied and later he would appear as an actor in one of Penn’s late films, Four Friends 1981.

But does Midnight Cowboy fit the ‘End of Innocence’? I’m not convinced. Most of the attempts to categorise the changes in Hollywood in the 1950s and 1960s, as the studios declined and the brief interregnum when some offbeat and ‘counter-culture’ influenced films got into mainstream distribution in the 1970s, are problematic. There are no simple cut-off points or starting points. No single film marked the boundary. I would argue that Hollywood changed over a ten-year period from the mid sixties to the mid 70s. Hollywood shrank, most films got smaller. Directors became more important but then films got bigger again and they were sold to audiences more efficiently again. Perhaps the only boundaries are those associated with the so-called ‘Movie Brats’. Francis Ford Coppola made his first mainstream feature You’re a Big Boy Now in 1966 and Stephen Spielberg directed Jaws, one of the first films to have a major national marketing campaign and a wide release building across the summer in 1975. Midnight Cowboy is just one of a number of enjoyable and interesting films that came out in that ten-year period. It could also be approached as a ‘buddy movie’, a film about two men which became a genre staple around this time.

The print we watched was a DCP from Park Circus. GFT1 is listed as 2K digital projection.