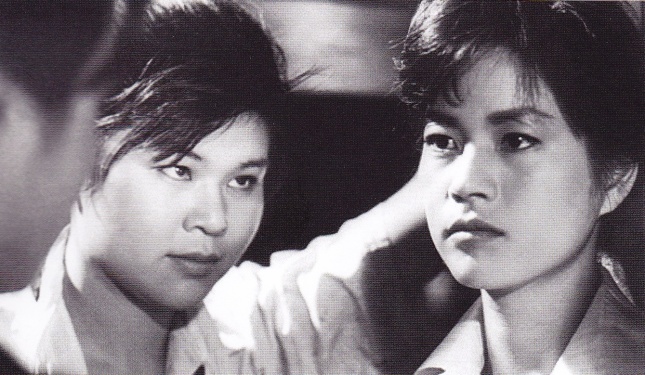 This film was the last screening in the Tanaka Kinuyo retrospective at the Leeds International Film Festival. It was her fifth film and was released in 1961. The scriptwriter was once again Tanaka Sumie together with Masaka Yana. The film deals with the rehabilitation of prostitutes. Prostitution was a common theme in Japanese films in this period. In 1956 the Government passed an anti-prostitution law which came into effect in 1958. The book from which the film was adapted came out in this period. There were also a cycle of films dealing with prostitution, a famous example was Mizoguchi Kenji’s Street of Shame (1956). However, Tanaka’s film is atypical in dealing with the question of the rehabilitation of these ‘fallen women’. The film seems to have differed from the book in a number of respects. The scriptwriters changed some of the story, including explicit references to lesbianism. However, it seems that the director re-introduced at least aspects of the last theme, and that topic is explicit in the final film.

The opening of the film features a series of short newspaper articles, and sequences in the red light district, including raids by the police. After the credits the action opens in the Chiragiku Home for Women [a rehabilitation centre: it is worth noting that the more recidivist offenders were sent to reformatories. We meet the staff, including the directress Nogami and a group of new inmates. The centre is toured along with a group from a Ladies Club, and includes a young married woman, Mrs Shima (Kyoko Kagawa who had already appeared alongside Tanaka Kinuyo in Mother and Sansho Dayu). I found the opening scenes not easy to follow as we meet a large number of characters and I found it difficult to catch all their names.

One couple that stood out were two older inmates, Kameju asnd Yoshimi. Kameju constantly makes advances to Yoshimi, who is fairly unrepentant about her trade. And at one point Kameju snuggles down besides Yoshimi under a coverlet telling her that ‘‘woman are better than men’. Yoshima makes frequent attempts to escape and this finally leads to a tragic end for the smitten Kameju.

Then the narrative narrows to focus on Kuniko (Hara Hisako) and to a lesser extent on her friend Chi-chan. Having obtained a good record in the Home Kuniko is allowed to leave and to attempt to re-establish herself in society and work. We follow her as she makes her way through three different jobs. Occasional voice-overs give us access to her thoughts and feelings. And she writes letters to Nogami, which the directress reads out to the inmates.

In the first job Kuniko is a paid help for a married couple with a shop. The work is hard and the wages low, 2,500 yen a month: apparently not a living wage. [It is worth noting that in the Home the inmates receive anything from a 62 to 15 yen rate for their work]. Embittered Kinuko wreaks her revenge on the husband and momentarily considers returning to her previous life. However, she is picked up by the police.

Back in the home Kuniko is now placed in a factory. She is set apart from the other girls there, and when she tells them about her past she is subjected to bullying and a sadistic attack by a group of fellow workers. She returns to the home painfully injured.

Her third job is in a ‘rose nursery’ owned by the husband of Mrs Shima. The husband is a lecturer. The young wife is very supportive of Kuniko, and there has already been a hint of attraction on her part when she visited the Home. Kuniko shares a room with her friend Chi-Chan, who has a job in a local cafeteria. The rule of the Home is to avoid entanglements with men, however Kuniko develops a relationship with the young worker in the nursery, Tsugasa. She is also visited by an old flame and pimp from her past. The social antagonisms around prostitution follow her here as she attempts to make a new life.

Michael Smith in his introduction remarked that the film showed more of a distinctive style than Tanaka’s earlier films. This was apparent and one of the visual pleasures was the use of the Tohoscope format in black and white. This is a fine film format and there are some striking compositions, especially in the several dramatic exteriors. I noted that more of the drama of this film was played out in the exterior settings. But there was also the use of framing and the drama on staircases and corridors that we saw in her earlier film, The Eternal Breasts. In many scenes Tanaka used the widescreen format to place characters in the setting and to place significant objects in the frame. There are placements and close-ups of roses in the nursery sequences which comments upon the situation. The filming of groups in especially well handled, and there are several stark tableaux-like shots at moments of intense drama.

I found the action and characters more conventional than in the earlier The Eternal Breasts.

For example there are fights among the women in the factory section, a staple of such films. The red light scenes seemed very familiar.  However, my colleague at the screening thought the film the less conventional of the two. My feelings were that whilst the relationships between the women were very interesting, the treatment of rehabilitation and of prostitution was familiar from other film treatments.

I was though, struck by the final sequence of the film. Kuniko is once more working, this time with woman collecting marine food in the waters along a beach. Her voice-over speaks of her wish to achieve stability and purity. The final shot shows her in a line of women returning with their heavy baskets along the sands. Then we have a great camera crane above the women, tilting up to show the sea and surrounding vista. The shot seems like a reverse image of the famous shot that ends Mizoguchi Kenji’s Sansho Dayu and conjures up a similar feeling of calm and perseverance. Perhaps it was homage to a master. In the Mizoguchi film the final shot shows two humped-back islands. In Tanaka’s film the equivalence are two rock pillars: Freudians would be able to make great play with this.

The whole series of films has been remarkably absorbing and extremely enjoyable. Michael Smith summed up the week with thanks to the Leeds International Film Festival, The Centre for World Cinema, The Japan Film Foundation and the Hyde Park Cinema Picture House. The applause from the audience was also a well-deserved thank-you to him from the audience for his labours in bringing these rare films to Leeds and introducing us to a little known but clearly very fine actress and outstanding woman filmmaker.