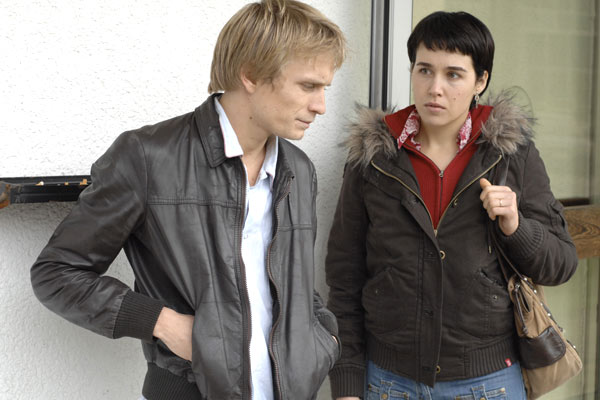 Jérémie Renier and Arta Dobroshi in The Silence of Lorna

The Walloon filmmakers Jean-Pierre and Luc Dardenne seem to be on a run of films focusing on young women in difficult social positions. They present social realist dramas set largely in the industrial zone around Liège (although industry rarely figures in the stories) with narratives seemingly taken on and worked over from the Ken Loach storybook. The films don’t have the Loachian humour and occasional bursts of melodrama, but instead offer a more intense narrative focus on an individual expressed through an austere and disciplined aesthetic.

The Silence of Lorna won the script prize at Cannes this year. I’m not sure I can see why except that the script is certainly provocative with two ‘shocking’ effronts to narrative convention and the possibility of engagement with a wide range of issues. However, the film is memorable because of its direction and central performance by relative newcomer Arta Dobroshi. She plays Lorna, a young Albanian woman who has become involved in a complex network of scams. At the beginning of the film, she has just received her Belgian ID – acquired through marriage to a junkie, Claudy. Of course, the Dardennes’ storytelling method requires the viewer to work this out over quite a lengthy sequence. But this is just the beginning of events that see Lorna passed from one man to another. The women she meets are invariably officials of the health service. Lorna is intelligent and resourceful, but can she survive working on scams in which she should not become emotionally involved?

I’m not sure if the film’s title is ironic. Lorna isn’t really ‘silent’ – indeed most of the time she speaks out. But she also has to be secretive and her speech is often directed within the small group of scammers who use her. Dobroshi is always interesting to watch and there are sequences in which you are forced to think about migration as an activity with criminal exploitation possibilities. Unfortunately, I don’t think this goes far enough for me – although I suspect that when I reflect upon the last few scenes, I may revise this view.

The Silence of Lorna is a North-West European social realist film and not a ‘crowd-pleaser’. On the way out of the cinema, somebody wondered out loud “Why would anyone go to Belgium from Albania?”. I really don’t see why Belgium is considered dull. I enjoyed the drab streets of the city as a place I recognised that in one sense seemed calm and civilised. I won’t spoil the ending but will point out that it suggests that the city and the woods outside the urban areas have some kind of symbolic value. We might argue that this industrial region that once made ‘things’ now frantically plies a trade in ‘identities’. I could relate this to those British social comedies like The Full Monty in which men who once worked in manufacturing are forced into forms of ‘performance’ instead. I’m not sure how I got from social realism to postmodernity – but perhaps that’s what films like this do?